Episode 22: Attack of the Theocrats! 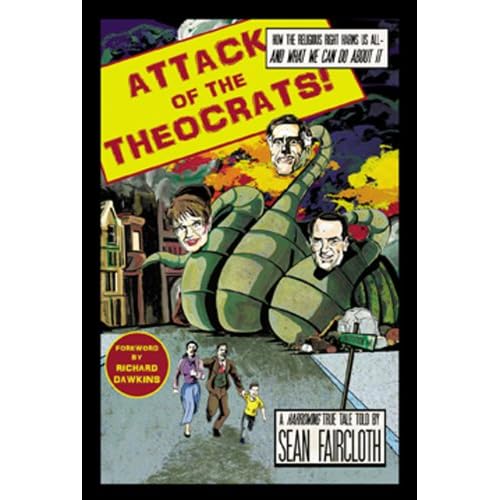 Sean’s book: Attack of the Theocrats! How the Religious Right Harms Us All- —and What We Can Do About It

Shocking! Will keep you on the edge of your seat! Sean Faircloth is doing such important work. There’s not a doubt in my mind that if he was (suddenly, inexplicably) zapped back in time to meet Thomas Jefferson, that the Founding Father would clap him on the shoulder and say ‘Thanks.’”

“Faircloth paints a sobering picture, but fortunately, as anyone who has heard his speeches knows, he also has an inspiring and invigorating vision to offer. . . . Readers will finish the book exercised, energized, and eager to join Faircloth in a bold rediscovery of the secular dream of the European Enlightenment and America’s enlightened Fathers.”

— Richard Dawkins, from the foreword to Attack of the Theocrats!

“I’ve devoted the last twenty years of my professional life to pointing out unscientific assertions that harm or swindle innocent people. It becomes particularly insidious when unsound reasoning is used to justify and apply unjust laws. This book describes this very real problem in American today, then offers a bold plan to do something about it.”

“What does the erosion of America’s noble separation of church and state the basis of the first secular government in the world have to do with your everyday life? In this lively and historically grounded survey of the way we live now, the author explains why the thirty-year-old assault on church-state separation affects all of us from children who are not getting a world-class education in science because of fundamentalist interference with the teaching of biology to soldiers subjected to evangelical proselytizing on military bases. Nothing could be more timely than this reminder that the founders left God out of the Constitution to provide citizens of every faith and no faith the freedom to act on their consciences. We ignore this historic liberty, the gift of America’s founding generation, at our peril.”

—Susan Jacoby, Author of Freethinkers: A History of American Secularism and The Age of American Unreason

“Faircloth makes a compelling case for people everywhere to steadily reestablish Thomas Jefferson’s fundamental idea and keep religions out of politics. Read this, and you’ll become a Constitution thumper.”

EDIT: This show got fucked when I transferred it to Libsyn, we were missing the last third of the show. It has been fixed. If you downloaded it in the first half a day or so you may need to re-download it so it actually works. All I have to say is this on the matter:

Skeptics with a K

Episode 18: Herman Cain is not Abel

Birmingham Skeptics in the Pub blog

Birmingham Skeptics in the Pub podcast